END_OF_DOCUMENT_TOKEN_TO_BE_REPLACED

Last week, NBC’s The Voice kicked off the third stage of it’s vocal competition with the live shows. This week we find out which two members from Team Blake and Team Christina advance, as well as see Team Adam and Team Cee Lo take the stage for the first time during the live show.

Alison Haislip, The Voice’s Social Media Correspondent spoke with the press last week about how her role on the show is changing now that The Voice has gone live, how important it is for the contestants to connect with their fans via social media, and what she thinks about the reports on the lack of critiquing from coaches Adam Levine, Christina Aguilera, Blake Shelton, and Cee Lo Green.

Haislip has a unique opportunity as the show’s Social Media Correspondent to connect with fans through Twitter and other social media outlets as a way to encourage their participation in building The Voice contestants’ individual fan bases, connecting with the contestants, and most importantly, voting. Haislip feels like the excitement to participate has grown, since fans realize that they can get their questions/comments shown on the air.

END_OF_DOCUMENT_TOKEN_TO_BE_REPLACED

Earlier today Tampa, FL based radio station 93.3 FLZ tweeted, “In NYC for music mtngs. With Jive now listening to @KrisAllen’s next single ‘Vision of Love,'” which left us fans wanting to know more information about this new song. 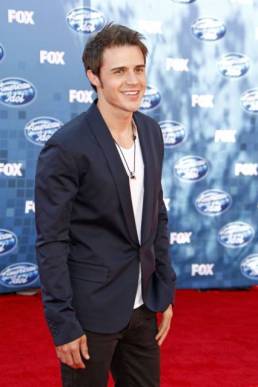 Toby Knapp of Hot 99.5 supplied Kris fans with a little more info on “Vision of Love” tweeting, “its poprock upbeat and fun…. sounds like a Kris Allen hit!”

So, is “Vision of Love” the first single of Kris’s highly anticipated sophomore album? For the time being, probably not. At least that’s what I’m thinking based off the couple tweets Kris just sent out.

“I know some of you have heard grumblings of a new single today. Well…I can honestly tell you that I haven’t picked a 1st single.”

He followed up with, “When the 1st single is chosen I will be the first to tell you. You will not hear it first from anyone else. I promise.”

Sounds good to me! It was fun to get excited over new music, and it can only mean good things if Jive is highlighting Kris to radio stations, right? I think so, plus it’s awesome that the DJs are liking the snippet that they played him!

When I first sat down to talk American Idol, I had just the worst migraine, which was caused by the auditions in Los Angeles that aired last night.

No, I’m not kidding. The L.A. auditions were by far the worst auditions that I have ever taken the time to sit and watch. I seriously want that hour of my life back.

This is season 10 of American Idol. I expected better than Thursday night’s episode. I guess I should have known better.

Before I get ahead of myself, let’s talk about Wednesday night’s auditions in Austin, TX. Even though the episode was so much better than the L.A. auditions, there were only a couple singers that I would consider being actual contenders in this season’s competition. Those singers are 21-year-old Jaqueline Dunford from Scottsdale, AZ and 19-year-old Casey Abrams from Idlywild, CA.

Jaqueline Dunford auditioned for the show with her boyfriend, 19-year-old Nick Flint. Dunford, who sang Duffy’s “Mercy” was in my opinion the best of the female singers in the Austin. She took that Duffy song and really in the ridiculous words of Randy Jackson, “blew it out the box.” I really like the tone of her voice, and appreciated her demonstration of vocal control.

My other favorite from Austin, Casey Abrams sang “I Don’t Need No Docter” by Ray Charles. This dude can sing. And scat. I love it! I am sensing a trend with the male singers with the soulful, raspy voices this season, but Abrams infused his audition with so much personality, that he set a nice tone for himself going into “Hollywood Week.”

The L.A. auditions episode that aired Thursday night was hands down the worst episode of Idol I’ve ever watched, and I’m saying this as someone who watched the train wreck known as season three in its entirety.
END_OF_DOCUMENT_TOKEN_TO_BE_REPLACED

The other night Lee DeWyze posted a TwitVid on Twitter, which included some nice words to his fans!

Hoping to hear a tour announcement from Lee soon!

Keep up with my latest articles and thoughts via my Twitter and Tumblr pages!

The video was directed and edited by Matthew Leonard. This is seriously better than any video treatment I could have imagined for this song! I can’t believe that Kris and KAB pulled this off without fans finding out! So awesome!