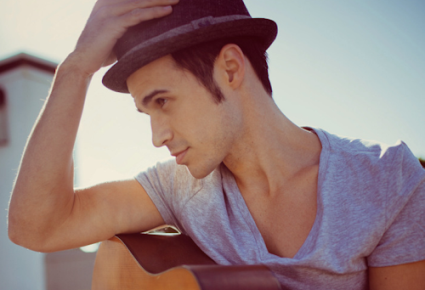 It’s a big week for Kris Allen. On Tuesday, the singer/songwriter and season eight American Idol winner followed up the release his 2009 self-titled debut with his latest album, Thank You Camellia. The 11-track pop-infused album, which includes his inspiring single “The Vision of Love,” is something that the singer said had “been a long time coming.”

Amid his busy album release day schedule, Allen graciously took the time to talk with me about challenging himself as an artist, getting to take a more hands-on approach with the album’s production, and which song off of Thank You Camellia that he’s excited to play live.

First off, congratulations on the release of your new album today.

Thanks so much. It’s a good day.

You’ve referred to Thank You Camellia as being more personal than your last album, did you find it easier to open up during the writing process?

I did. I definitely really found it easier, but I also challenged myself with kind of just being real. I know some of my favorite records are like the real ones. That you can tell the person is, you know, that there’s good things and bad things. And so for when I was writing this record and doing all the production and everything, I was just trying to be real with everything and let people know exactly who I am and what I’m doing here.

When you were getting ready to approach this new album, was there anything specific that you wanted to improve upon from your last album?

I just think that the cohesiveness of the album I wanted to be a little bit better. And again, I just wanted it to be more personal and kind of more real. And I really like the last album, and I still love playing some of the songs. Probably more than anything though, I wanted the songs to be more memorable and more catchy on the first listen or the more you listen to the song, you kind of fall in love with it. And I feel like there’s a good blend of that on this record.

It’s usually more gratifying when it comes together through a longer period of time, because I fall in love with a song over a period of time and it kind of shapes into this thing. But some of those songs, some of the ones you don’t fall in love with, because you don’t spend enough time with it, then you end up falling in love with it later. But something like “Monster,” which I’ve had for a long time and kind of took awhile to write or just seeing how it goes or something like that, I’ve fallen in love with those songs, because I’ve spent so much time with them.

How different was your first go at “Monster” from the version that is on the new album?

Even right before we started producing the song, it sounded different. I think the bridge and the pre-chorus were in different places, it sounded different. The melodies were different, so I think even when I started writing the song it was from a different perspective, as well. Even that has changed throughout time and I don’t ever want to do that again. [laughs] It was really hard to kind to do that. I was pretty stressed about it. It’s probably the most stressful song I’ve written. But it’s one of my favorites, though.

So would you consider this song to be the one that pushed you the most creatively throughout the album process?

Yeah, probably that one just because it maybe took a little bit more than some of the other ones. What am I going to do with this lyric? Or how am I going to make this monster thing work and not be too cheesy or not be too, you know, not coming from me? I feel like I had to kind of think about that one.

You’ve mentioned that you were more involved in the production side of this album, what all did that kind of entail?

Just being in the studio; I wasn’t able to do that last time. And getting to play a lot of the instruments, as well. I know I played a lot of the stuff that Tim Pagnotta produced. And just being able to have ideas. This is my record, I feel like I should be able to do that. And kind of sitting in the studio with the producer boringly for hours and hours and hours just trying to come up with the right thing to do and working together with those different people and making the song the best it could be.

How did you go about selecting producers to work with for this album?

For the most part, whoever wrote the song produced it. But also, because I got to write with some of those people, like Tim Pagnotta, Curt Schneider, and even Nasri, some of those people I got to write some songs with, so I knew what their stuff sounded like. I knew that we could hang out and have a good time together, which is probably 90 percent of being in the studio with a person. And just having a good rapport with them and being able to bounce ideas off each other. And the nice thing was that I knew them well enough that I could show them that I could show them my songs that I had on my own. Like, “Hey man, what do you think about this?” The great thing was that they kind of jumped at the opportunity to produce those songs. So I owe a lot to those guys. I’m glad that those songs were able to get out there, because those guys believed in them enough.

When you were putting together the track listing for the album, how many songs did you start out before narrowing down the list?

I think that there were around 50 or 60 songs for this record. Something like that. We quickly whittled that down to 20, or maybe even 17 or 18. There are a couple songs that didn’t end up on the record that I hope people hear some day. Maybe we’ll play [them] live.

Was there a song that made the cut that you maybe at first thought didn’t fit the overall cohesiveness of the record?

Probably something like “Blindfolded,” which I wrote a long time ago. It’s one of those things where you write a song and you are so separated from it for so long, that you just can’t get into the emotional place in the song and can’t really fall in love with it. But we changed the production on it, and I kind of re-introduced myself to the song and kind of what it was and what it meant. It almost took a different meaning which was very cool.

Is there a certain song on the album that you’re excited for people to take a listen to?

The one I’m most surprised and excited at the way that it turned out is probably “Rooftops.” I think that people have kind of latched on to that one a little bit, too. It’s kind of unexpected, but really, really cool. It’s a lot of fun to play live. It’s one of my favorites right now.

You have this great duet on your new album with Meiko called, “Loves Me Not.” Did the song initially start out as a duet?

It was kind of an afterthought. I started the song on my own and I had this verse/chorus idea. I brought it to some other people, and they were like, “Let’s listen to some of your ideas,” so I played that for them and we kind of changed it around to this other thing. We started writing the second verse and it just felt kind of unmanly, I would say. It seemed like something a girl would say. We were like, “Man, this song would sound really cool as a duet.” Just changing the “she loves me not” to the “he loves me not” was a really easy change. So, we had a duet. It kind of formed into that. It made the song a little bit more fun to write, because I’d never done it before.

Which of the songs off the new album are you looking forward to playing live with your band?

Definitely “My Weakness.” It’s going to be a lot of fun to play live. We haven’t figured it out yet. I personally cannot whistle very good, so we need Torres (bass player) to come through for us. He’s a great whistler.

And lastly, do you feel like Thank You Camellia is going to be the album that shuts down any preconceived notions that people may have had about your music in the past?

Kris Allen’s new album, Thank You Camellia, is available now. For more information on the artist, check out his official website.