And so it goes, Karen Rodriguez was eliminated from American Idol this week. Not shocking in the 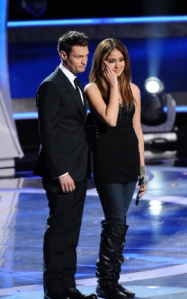 least. And she did herself absolutely no favors by singing Mariah Carey’s “Hero” as her swansong, and then pleading to the judges for “The Save.” Ooh…girl. That save is reserved for Lauren Alaina, Pia Toscano, and possibly Casey Abrams.

In my eyes, Karen was booted for her hot mess of a performance from last week. I think sometimes when contestants have a bad performance, the audience’s opinion of them carries over into voting the following week. Not saying that it’s fact, just that it could be the case for Karen’s dismissal this week.

Let’s talk about the other two contestants that found themselves alongside Karen in the bottom three this week, Haley Reinhart and Naima Adedapo.

I figured that Haley would find her way back to the bottom three just based on the judges comments from the night before. The judges definitely can sway the vote, and if they are consistently giving a contestant a hard time, I think that translates to the audience as, “Vote for Lauren Alaina.” Ha ha, I’m kidding. But, I do think that their comments combined with her lackluster performance is why Haley found herself back in the bottom three this week.

I was legitimately disappointed when Ryan Seacrest announced that Naima was headed to the bottom three. I think the judges gave her too much of a hard time in their critiques. Her performance was nowhere near as bad as they made it out to be. She is one of the more polarizing contestants this season, and it would be a shame to see her before she reaches her full potential on the show. I think Naima is keeping the show fresh and bringing something new to the table. If she’s eliminated in the next few weeks, I feel like it could be a devastating blow to the season.

I wanted to touch on this week’s group song, which was a mash-up of Steppenwolf’s “Born to Be Wild” and Lady Gaga’s “Born This Way.” First off, good on Idol for a live group performance! Nigel Lythgoe tweeted last week that the group performance was live, which I’m still not sure I entirely buy, but it is what it is. I felt like this week’s mic issues were done purposely to show that the contestants were singing live. You got your point across, Nigel.

The mash-up itself just didn’t work. Someone on my Twitter feed something to the effect of, just because both songs have the word “born” in the title doesn’t mean they should be mashed up. I have to agree with that. I think if Idol attempts a mash-up again this season, they should consult with one of their own Idol winners. Kris Allen did a fantastic mash-up of Tears For Fears’ “Everybody Wants To Rule The World” and Michael Jackson’s “The Way You Make Me Feel” during his 2010 fall tour.

A bright spot in this week’s results show was the return of season nine Idol winner, Lee DeWyze, who

performed his latest single, “Beautiful Like You.” Say what you want about Lee, but he sounded great last night. I don’t know if I would have picked “Beautiful Like You” to be his follow-up single to “Sweet Serendipity,” especially when “Me And My Jealousy” has “radio-friendly” written all over it, but that’s just me. Anyways, I liked seeing Lee back on the Idol stage last night, and I hope the show continues to highlight the talent that came off of their show each week.

The Top 11 will be taking on the songs of Motown next week. I am pretty sure that Nigel said before the season started that the contestants wouldn’t be forced out of their genres, so I am actually a little shocked about this theme week.

Alright Idol fans, do you think the right person went home this week? And what are your thoughts on next week’s theme?

One thought on “Idol Wired >> Another Girl Bites The Dust”