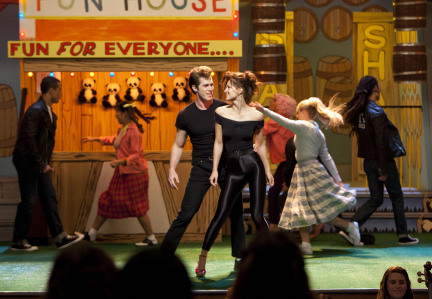 Glee: The Music Presents Glease hit stores earlier this month. The album features select songs from Grease, featuring the best of both new and original cast members. As far as my ears are concerned, the Glee Cast definitely did the music of Grease justice.

Glee’s Sandy and Danny are played by the show’s newcomers Melissa Benoist (Marley) and winner of the most recent The Glee Project competition, Blake Jenner (Ryder). Together the two are pretty evenly matched vocal-wise on “You’re The One That I Want.” Their vocal chemistry had more of a playful sort of innocence to it, which made it a pleasant listen.

Glee veterans Lea Michele (Rachel) and Cory Monteith (Finn) slide into Sandy and Danny’s shoes during the second verse and chorus, finishing out the rest of the song. Michele really channels the sexy side of Sandy in her lyrical approach to the character. You get the sense of the character’s transformation in her vocal phrasing alone.

Benoist delivers a sincere vocal performance on “Look At Me, I’m Sandra Dee (Reprise).” She proves to have some pipes, as she nails the soaring notes at the end of the song.

Jenner, along with Chord Overstreet (Sam) and the guys of Glee, brought the bro’d out “Greased Lightning” to life. Jenner, being one of the several new kids on the Gleeblock, gave it his best with one of the one the musical’s most recognizable songs. The only thing that I felt was missing from this track was a bit of swag. Granted, Danny Zuko is singing about a car, but he does it in a way that’s just kind of slick and cool. Jenner’s Zuko just needed to portray that coolness factor a bit more in the tone of his voice.

Glee’s resident heartthrob Darren Criss (Blaine) takes on “Hopelessly Devoted to You,” which showcases a more vulnerable side to the pop singer’s voice. Being that it is an emotional song, it’s nice to hear a guy’s voice on this track. Hearing the song from a young man’s perspective kind of added a bit of sweetness mixed in with the heartache that Criss is conveying throughout the song. Additionally, his character Blaine was appropriately cast as Teen Angel, which led to another swoon-worthy vocal performance from Criss on the track, “Beauty School Dropout.”

Naya Rivera (Santana), Alex Newell (Wade/Unique), and Kate Hudson (Cassandra) each share lead vocals on “There Are Worse Things I Could Do.” The sultry tone of Rivera’s vocals give her the edge amidst her fellow vocalists. However, it must be said that both Newell and Hudson were impressive, especially Hudson who carries out a couple of beautiful drawn out notes.

For me, the standout track on the Glease record is “Look At Me, I’m Sandra Dee,” which is performed by newcomer Becca Tobin (Kitty). Tobin really sinks her teeth into this song and gives quite the entertaining and spot-on vocal performance. Her delightful delivery of the song has made me a fan of Glee’s newest bad girl.

Overall, I feel that the cast of Glee really brought a great sense of nostagia back with these songs. Hopefully fans of the show that have never encountered these songs before will be inspired to find out why Grease is the word. Glee: The Music Presents Glease is available now.