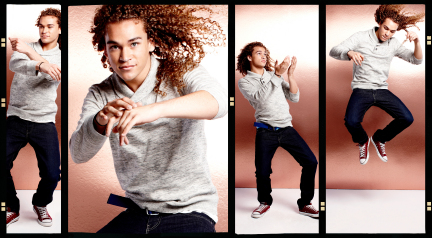 Sunday, July 22, 2012 was a big night for a certain member of the American Idol season 11 Top 10. DeAndre Brackensick returned to his hometown of San Jose, Calif. to perform live as part of the current American Idols Live! tour.

Before 17-year-old Brackensick hit the stage at the HP Pavilion, he sat down with me backstage for a quick chat. He talked with me about being home and performing in front of his hometown crowd, his thoughts on Steven Tyler and Jennifer Lopez leaving the show, and his advice for season 12’s contestants.

Are you excited to be back in San Jose?

How has the tour been treating you so far?

It’s been fun. It’s been really, really great. You can’t ask for anything better. I wish I could do this the rest of my life with these people.

What has been your favorite performance from one of your fellow contestants while on the tour?

I would say Erika’s [Van Pelt]. Erika’s “Glitter in the Air” is phenomenal. She didn’t really get to show who she was on the show. So, I’m really glad that she gets to put everything out on that stage. It sucks that she only has one song. After the show, when we go see the fans and stuff, a lot of people come up to her and go, “I never knew you could sing like that!” Erika has so much more to give, and I’m glad she has this opportunity to [show] people what she can do.

So, what’s kind of going through your mind tonight as you get ready to perform tonight in front of your hometown at the HP?

I’m excited. I’ve been waiting for this. This is my city. They supported me the most, you know? It’s really cool to give back the love that they’ve been giving me. I’m excited, I’m ready. I just wanna get out there already.

Switching over to the show, were you surprised at the news that both Steven Tyler and Jennifer Lopez decided to leave the show?

No. You know, they got their careers started up again, so they’re doing [that] right now. So, it’s going to be cool. I think it’s good to have different judges and switch it up. It’s gets tiring having the same type of thing and kind of [knowing] what to expect from certain judges. It’s cool to have different outlooks from different artists.

Since you’ve now competed on the show, what are some qualities and attributes that you think the new judges should bring to the panel?

Just to be open. Respect the music, but still respect the artist that [the contestants] are, no matter what they do with the song, whether they switch up the melody a little bit. Just be open, but be real. Don’t tell one person something, and then tell someone else another thing, you know? Just be real about it. I think our judges did that a lot. Just, as a judge, I think that’s a big thing.

When it came to performance critiques, which judge’s feedback did you tend to value the most?

They all had great things. They have different things about them that I really take to heart. Like, Steven knows his music. Point blank. He’s been in this business Lord knows how long. Anything that had to do with pitch or melody or anything musically, I took [that] from him.

As far as performance-wise, everything, I really took that from J-Lo, because she’s been in this game since she was a Fly Girl. She knows how to perform. She knows how to put on a production. It’s not always just about singing, because we all sing. All Top 60 of us know how to sing. It’s about getting those people and she knows how to do that, like crazy great.

What do you feel was your standout moment of the season?

What advice do you have for season 12’s contestants?

Be yourself. Don’t listen to people. Learn from them, but don’t listen. Take what you need and what you think will be satisfactory to your voice, because in the end you know your voice the best. You’ve been singing, you know how to work your voice and what works good for your voice. And if you have any, like one ounce of doubt, even after you go over it; don’t do it. You know what works best for your voice.

No matter how long they’ve been working, no matter how much experience they’ve had in this business as far as music, they don’t know your voice. You go with what you know how to do.

What’s coming up next for you after the tour’s up?

Well, you just graduated high school. Are you thinking about going back to school at all?

I hope so. I’m planning to [attend] some type of community college. I really want to push my music, whether it be background singing or anything. Like, background tracks or if my girlfriend needs a background singer when she goes on tour. Anything.