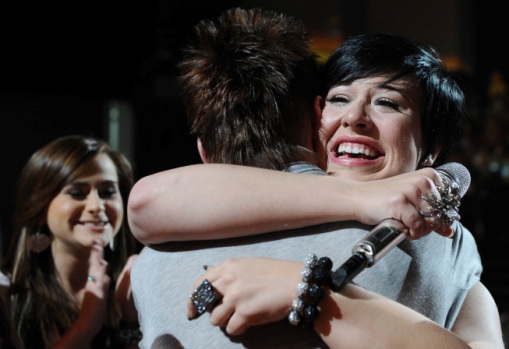 On Wednesday night, this season’s crop of American Idol contestants took on the classic songs of one Mr. Billy Joel. As much as I would love to report that each contestant did a fabulous job this week, however that was not entirely the case this week.

The show kicked off on a bit of an awkward start from my hometown contestant DeAndre Brackensick, who sang, “Only the Good Die Young.” I feel like this is the kind of song, where you need to have a clear grasp on the lyrical concept and what the song is about, so you come off believable to the audience. I feel like DeAndre wanted to do an up tempo song, which is great and I fully support that, but maybe he should have gone with “Uptown Girl” or “Tell Her About It” this week to avoid the bottom three, which we will get to.

Another misstep this week came from the “little girl with the big voice,” Hollie Cavanagh. This season’s aspiring Celine Dion took on “Honesty.” In the words of Randy Jackson, it was “a little pitchy, dawg.” Hollie has the ability to belt out the big notes; the thing is that she needs to be to hold them out without her pitch going astray. It would be a travesty if she turned out to be this season’s Pia Toscano. She needs a breakout performance to happen and soon. Plus, the ballads are getting to be quite sleep-inducing.

Like I said last week, it wouldn’t hurt Hollie ditch the ballad brigade to show some versatility with a mid tempo song. I would suggest the same to her big-voiced show mate Jessica Sanchez, who sounded great this week, but left me feeling bored with another ballad. Yes, I realize that Jessica went up tempo last week, but I think her return to ballads was due to ill-advised feedback from the judges. I’m looking at you, Steven Tyler.

When it came to Phillip Phillips this week, things were most definitely not black and white. From how it was suggested he should dress (no gray!) to how and who he should perform his song choice, “Movin’ Out.” P2 ignored the “experts” and their “advice” and changed up the melody just enough to put his own groove on the tune, which Steven Tyler referred his melody change as being “Phillip Phillips’ed.”

I applaud P2 for not folding to the Idol confines. I think it speaks volumes of his integrity. After the show aired on the west coast he tweeted, “Good night tonight…had fun up there. Everyone, be yourself always. Don’t let this world try to change you”

Elise Testone sang “Vienna” on Wednesday night. Holy smokin’ hot vocal performance, Batman! Her performance was flawless. The vocal run at the end was sung with ease; not a note in her performance felt forced. So of course, I was thrilled when she did not find herself in the bottom three this week. With the gaggle of teenage girl voters that vote for the guys because they’re cute and funny, it does force the female contestants to really make themselves stand out and show that they are just as, if not more than worthy of our votes. I think if Elise continues to make smart song choices and just sings the crap out of them, I could see her cracking the Top 5.

I thought the performance of the night belonged to Colton Dixon and his subtle take on “Piano Man.” Albeit the stage lighting was a bit over the top, I liked that the performance was just Colton at home on the piano. I think the nuances in his voice throughout the performance is what helped make that song his own.

Colton mentioned in an interview that he felt like it could be his week for what we Idol writers like to call an “Idol Moment.”

“It’s going to be a big week for me. If I do the song right, it could be my moment while I’ve been on ‘American Idol.’ So I’m really, really excited about it,” he said.

If P2 is the universal favorite to win this season, then Colton is hot on his trail. He is nailing all his performances with great vocal precision and versatility. Don’t get me wrong, I think P2 has done a great job with his songs so far by making them his own, but there is a lack of versatility; we’re not seeing him take a little more risk with his song selections, whereas Colton seems to step out of his comfort zone, like last week with the White Lion track. Either way, both singers are bringing a lot to this season’s competition and keeping it interesting – which I more than appreciate!

On results night, it was DeAndre, Heejun Han, and once again, Erika Van Pelt in the bottom three. DeAndre was the first of the contestants sent back to safety and securing his spot in the Top 9.

I was not surprised to see Heejun in the bottom three. I know that he has a huge following due to having this hilarious sense of humor; I just wish his vocal ability was on par with the rest of the contestants this season. I liked the beginning bit Wednesday night with the fake-out at the piano into his performance of “My Life.” It was just that his actual vocal performance was breathy, out-of-tune mess.

I get that Idol is probably a bit suffocating for the contestants and that Heejun wants to show more of his personality that people who are not on Twitter don’t get to see, but I really want to see him deliver a vocal performance that shows he’s, for lack of better words, “in it to win it.” He needs to not disregard his vocal performance, because Jimmy Iovine made a huge point Thursday night; Interscope is not going to spend a lot of money on someone giving sub-par performances.

Erika, on the other hand, did an amazing job with “New York State of Mind.” Her phrasing was so on point and her drawn out notes were gorgeous. Her final note was just the icing on the cake. I loved that she made the attempt to break away from the sea of blondes this season with her new drastic cut and dye job. I just wish all of this combined would have been enough to save her.

I think the judges are partly to blame for Erika’s ouster in the sense that they were always giving her mixed feedback. I think when they do that, it sends the message to the fans that they don’t like that contestant as much as contestants they give clear praise to. And as a result, the show loses a singer that definitely deserved to perform the following week.

What did y’all think of this week’s performances? Did the right person go home?