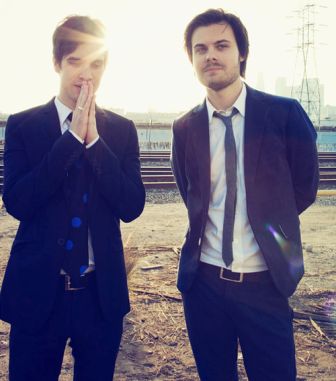 As someone who listens to music and reviews various acts throughout the year, you can imagine trying to narrow the list down to just five songs was a bit of a task. I basically went with the songs that immediately came to mind. All five tracks are songs that I still listen to on a regular basis and that’s what truly makes them a favorite. Throughout this past year, these are songs that have been there for me, allowed me to let go of stress, or just simply put a smile on my face. Or in one particular case, got me up and movin’ like Jagger. So without further ado, allow me to present to you my Five Favorite Songs of 2011!

The lyrics of this song is huge reason it became one of my favorite songs of the year. Part of the hook that Adam Levine sings throughout the song, “Make me your radio, and turn me up when you feel low,” describes how I feel about everything. About my writing, about my family and friends. Music is such a big part of who I am, and this song is a perfect metaphor that sums me up completely. My heart’s a stereo, indeed.

To be honest, “The Last Song” is probably one of the most emotionally poignant songs I’ve heard all year. Usually, I’m not a huge fan of ballads; I’m all about upbeat music that gets you movin’. However, I can’t ignore a great song that contains some real deal heartfelt lyrics. What I like about this track is whether I’m listening to a live acoustic version or the album version of the song, the sincerity of emotion in Tim’s voice never waivers. I dig an artist that performs with their heart on their sleeve, which is why “The Last Song” continues to find itself in constant rotation on my iTunes.

If ever there was a song that was a musical equivalent of a hug, Gavin DeGraw’s “Soldier” would be it. There have been countless times that I have gotten into my car after work, popped Sweeter into the car stereo, and just cranked the volume up when “Soldier” starts playing. I’m a big fan of, I guess what I’ll call “feel good music”; I love a great uplifting kind of song. I’m a longtime fan of Gavin’s, and  I really took to this song, not only for the sentiment behind the lyrics, but also due to the fantastic music arrangement. There’s a soulful groove to the track that will get you hooked, which makes it pretty much impossible to not feel the love.

My favorite band and my favorite female vocalist came together and created one of the catchiest songs of 2011. Don’t front with me, I know y’all have whistled along with this track. Some people think this song is obnoxious; I happen to think it’s one of the best collaborations to happen to pop music this year. It’s a sexy song that you can’t help, but get up and dance around to. (I seriously cannot be the only one who bops along to this around the house on laundry day.) Is it the best Maroon 5 song ever? Not even close. Is it fun to listen and sing-a-long to? Heck yes!

Like I stated earlier this year in my recap of the Panic! show I attended this past October; when it comes to this band, I arrived fairly late to the party, but I’m happy that I finally made it. (Yep, still cheesy.) I was first introduced to “Ready To Go” this past summer at The Warfield, when the band opened up their set with the energetic track. Great tempo and well-arranged, I was immediately sold on both the song and the band. The next day I bought a copy of Panic!’s Vices & Virtues, put the song on repeat, and the rest is history.

“Ready To Go” really sort of became my personal anthem this year. When new challenges and adventures arose, my goal was to embrace whatever was thrown at me, make the most of any opportunities, and to most importantly, have some fun. Get me out of my mind? Yes, please!

Upbeat, catchy, and rockin’ a ridiculously awesome and theatrical arrangement, Panic! At The Disco’s “Ready To Go (Get Me Out of My Mind)” is easily my favorite song of 2011.

What are some of your favorite songs from this year?