I finally got caught up on The Voice from last night, and I am truly going to miss this show! I can’t believe we find out the winner tonight! Not to get completely cheesy, but truly all four of these singers, Javier Colon, Dia Frampton, Beverly McClellan, and Vicci Martinez, are winners already. They have worked with some of the biggest and most relevant names in the business and on national TV, no less! 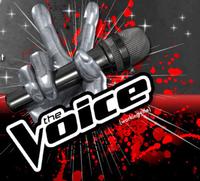 I really thought that the coaches, Christina Aguilera, Adam Levine, Blake Shelton, and Cee-Lo worked it out on “Under Pressure.” I think it’s such a treat to see them all come together and perform. I’m thankful they weren’t handed some original song to try and pull off. Haha. And we’ll get to those lovely originals in just a bit.

I loved getting to see the contestants perform duets with their coaches. Dia and Blake’s cover of Tom Petty’s “I Won’t Back Down” was pretty cute. Singing side-by-side in matching sunglasses, the duo basically sang a song that could be Dia’s theme song to her time on The Voice. With her, we’ve truly gotten to see a confident artist blossom.

On the flip side, Dia’s original song, “Inventing Shadows” was one of the better originals performed last night. But it didn’t move me. Dia can sing, I think that’s something we can all agree on, but her stage presence is lacking. I get this show is about finding “the voice,” but it would be nice if we could see her connect with the audience a little more.

Vicci and Cee-Lo’s duet on Pat Benatar’s “Love is a Battlefield” was extremely entertaining. Cee-Lo reminded me of one of the Road Warriors from the WWE. I thought Vicci sounded absolutely amazing; that song fit her voice perfectly. Unfortunately, I cannot say the same for Cee-Lo. Wasn’t really diggin’ this song pick for him, but overall I liked their performance a lot.

Vicci’s original song, “Afraid to Sleep” honestly kind of put me to sleep. I was expecting a big rock number from her. This girl has got the chops to take on a huge anthem, and this heartfelt ballad honestly left me feeling pretty disappointed in the song selection.

I know that Michael Jackson’s “Man in the Mirror” has been endlessly covered, but I have to admit that it was great song choice that complimented not only Javier’s voice, but also Adam’s. I thought they both sounded just superb, and I can only imagine what a treat it is to perform with Adam Levine. (This happens to be a not-so-secret dream of mine.) I am most definitely going to buy this duet off of iTunes.

I was not surprised that Javier’s original song was this overtly heartfelt ballad. I liked that “Stitch By Stitch” somewhat tells a story, because those are songs that people can relate to. It’s a soulful song, which allows Javier to really let his emotions overrun while he’s singing. Javier is this devout family man, so I think a song like this really fits him. And apparently y’all liked it, since it was #2 on iTunes this morning!

I have to say that I have been on Team Adam all season long, I am backing Javier tonight for the win, but I have to say the singer that won the night for me was Beverly.

Beverly’s duet with Christina on “Beautiful” gave me chills. Writing about it right now, I am getting chills. This song has always pulled on my heartstrings, and this duet was just magic. (Also, A+ crossover promo props to Christina!)

Hands down, Beverly has the best original song of the final four contestants. “Lovesick” is a great big power sing-a-long anthem which is sure to kick off her post-The Voice career on a positive note.

Is Beverly going to win tonight? Unfortunately, probably not. If the music-buying public has any say, the winner is going to be Dia or Javier, who had the #1 and #2 spots on the iTunes chart this morning. But like I said earlier, I think all four of them are truly winners, and I sincerely think the best of the entire competition made it to the end. When’s the last time that happened on American Idol?

Anyways, what can I really say about this show that I already haven’t? I love how good the coaches are to their contestants. I think the support has truly made these singers better artists. The actual work and encouragement that the coaches have put in is truly impressive. I love that this show is basically one big lovefest.

What did you think of last night’s episode, and who do you think is going to be the first ever winner of The Voice?