You know that phrase, “catching lightning in a bottle”? I think that is what Glee accomplished the first time with guest star, Gwyneth Paltrow (Holly Holiday). Her rendition of Cee-Lo’s “Forget You” is one of season two’s better tracks. Paltrow even went on to perform the hit with alongside Cee-Lo at this year’s Grammy Awards. 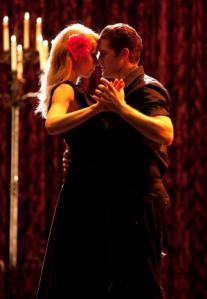 This time around, I felt like the magic was mostly missing from the three tracks Paltrow is featured on this week. That could be because she is not one of those singers that can sing the phone book. She’s good, but she’s not Lea Michele.

To kick things off on a positive note, Paltrow’s take on the Joan Jett song, “Do You Wanna Touch Me (Oh Yeah)” is pretty good. I think Paltrow sounds best when she’s able to infuse some personality into the songs she’s singing. I think that is part of why “Forget You” became fairly popular, that she sounded pretty sassy while she was singing it. This was my favorite of the three Paltrow-dominated tracks this week.

Dalton Academy’s Warblers took on Neon Tree’s hit, “Animal,” this week. I would just like to say that it’s about time that Chris Colfer (Kurt) is featured on a Warblers’ track. Although, both his and Darren Criss’(Blaine) vocals were slightly attacked by the monster known as auto-tune. Colfer and Criss have fantastic singing voices, I don’t completely understand the need to overdo it with the studio magic. Shout out to Tuft University’s Beelzebubs for another job well done with the backing vocals.

The one track this week that really didn’t go over well was Matthew Morrison (Will) and Paltrow’s take on Prince’s “Kiss.” I now completely understand why Prince usually never gives out the recording rights to his songs. I wouldn’t want to hear my songs butchered either. I found Morrison’s falsetto to be simply unpleasant. Paltrow sounds pretty good, until she hits a note towards the end of the song that is just cringe-worthy. I feel with a song like this, Glee should have thought to put their own spin on the arrangement, so it would work with both Morrison and Paltrow’s vocal ranges.

I really enjoyed Glee’s take on Fleetwood Mac’s “Landslide,” which again featured Paltrow, Naya Rivera (Santana) and Heather Morris (Brittany). Based on the storyline going on in this week’s episode, I kind of wish that Rivera was given more of the lead vocals. In the bit part that she does have, she sounds pretty fantastic.

The last song covered in this week’s episode is Starland Vocal Band’s “Afternoon Delight.” This song is so cheesy, yet the lyrics still managed to skeeve me out a little bit. The song features John Stamos (Carl), Mark Salling (Puck), Jayma Mays (Emma), Lea Michele (Rachel) and Dianna Agron (Quinn). In the context of the episode, it’s fairly funny, but it’s hard to take listening to the track out of context seriously.

Overall, the Gwyneth Paltrow Glee takeover was alright. I think “Animal” from The Warblers kind of saved this week’s batch of tunes.

To get a first listen of a handful of songs from next week’s episode “Original Song,” head over to Glee’s official music website.