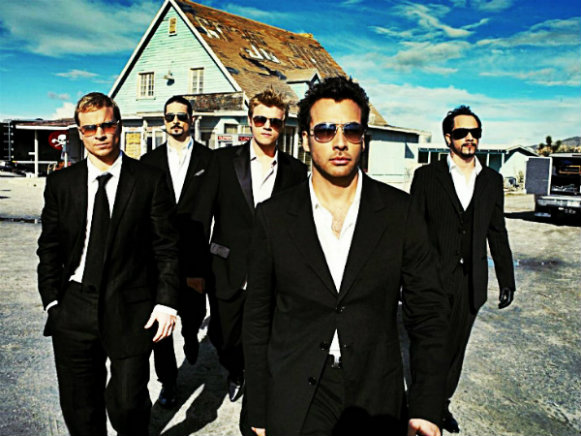 END_OF_DOCUMENT_TOKEN_TO_BE_REPLACED

Last summer while the New Kids on the Block were wrapping up their latest tour at Radio City Music Hall in New York City, they surprised their audience by bringing out the Backstreet Boys. singing “I Want It That Way.” A handful of months later, it was announced that the two boy bands would be joining forces on a full-fledged tour.

Before heading out on their current summer tour, the supergroup came together to release a joint collection of greatest hits as chosen by their fans called NKOTBSB. The album consists of five New Kids on the Block songs, five Backstreet Boys songs, two all-new tracks, “All In My Head” and “Don’t Turn Out the Lights (D.T.O.T.L.),” and a mash-up of both groups’ hits.

Overall, I think this greatest hits album is a fantastic mix of hit songs from both groups. The only change I would make is to swap out Backstreet Boys’ “Larger Than Life” for their lead single off their Black And Blue LP, “The Shape of My Heart.”

As much as I love both of these groups’ greatest hits, the standout track for me on this set is the collective NKOTBSB single, “Don’t Turn Out the Lights (D.T.O.T.L.).” Written by the song’s producer, Emanuel Kiriakou, along with Claude Kelly, and Jess Cates, it’s one of the best-written pop songs that I have heard in awhile. The track earned an A- from Entertainment Weekly’s Sandra Gonzalez, who said NKOTBSB “reclaim their reputation for creating perfect, infectious pop tunes with this danceable debut single.” I couldn’t agree more.

If you’re a fan of both of these groups, the NKOTBSB album is basically a dream come true.

NKOTBSB is available now. For more information and current tour dates for NKOTBSB, check out their official website.

Listen to their interview with Ryan Secrest below!

And without further ado, take a listen to the first joint single from NKOTBSB, “Don’t Turn Out The Lights”!

I love it! (You’re absolutely shocked, I know!) But really, this could have been either really good or really bad. I raised an eyebrow at the groups recording music together, but this is really, really good. Seriously, this is one of the catchiest songs that the Backstreet Boys have released as a single in a loooooooooooooong time.

As a longtime fan of both groups, I can attest that it’s an absolute trip to hear a song with vocals from both Joe McIntyre and Brian Littrell on it. (I’m kinda dying on the inside right now! Haha!)

If you love this song,  then don’t forget to download your copy of “Don’t Turn Out The Lights” when it hits the iTunes store tomorrow!

What does everyone think of the NKOTBSB collaboration? Hang tough in the comments below!

It was announced earlier this week that Backstreet Boy A.J. McLean is headed back to rehab.

In a statement released by his publicist McLean said, “For personal reasons, I’ve checked myself into a rehab clinic. With 2011 being a busy year for Backstreet, I want to be healthy and perform & sing for the people at my very best and happiest. None of this will affect our current tour plans and I look forward to seeing everyone really soon! Thank you for all your support and respecting my family and friends privacy during this time.”

It was during the summer of 2001 when McLean entered rehab for the first time. Four members of the Backstreet Boys, Brian Littrell, Nick Carter, Howie Dorough, and former member Kevin Richardson made an appearance on MTV’s Total Request Live (most notably referred to as TRL) to make the heartbreaking announcement to their fans.

The Backstreet Boys are heading out on tour this summer with their predecessors New Kids on the Block. Blue Bloods star and NKOTB member Donnie Wahlberg tweeted this message in support of McLean.

“As a friend of A.J. McLean- what matters most is his health. As a partner in this band- nothing will stop all 9 of us from doing this TOGETHER.”

The Backstreet Boys sounded so much better last night, although I think the definitely were out-performed by the New Kids. (This is something I never thought I would see myself say. But, it’s true.) I do have to add that the high note Brian Littrell hit during “I’ll Never Break Your Heart” was fantastic, and took  me straight back to high school.

Check out there performance from NYE below!

Ryan Seacrest announced via Twitter this morning that New Kids On The Block and Backstreet Boys will be going on tour together during 2011.

My reaction to this news?

Both NKOTB & BSB will be interviewed at 8 a.m. PST on On Air With Ryan Seacrest on November 8.

Also according to MTV, NKOTBSB will be making their debut with a joint performance at this year’s American Music Awards on November 21.

For more information check out NKOTBSB.COM!

Are you excited? I’m excited!