“An ultra-polished variation on the Americana-tinged folk-pop now dominating radio,” is how Billboard described F-Stop/Atlantic recording artist Matt Hires’ single, “Restless Heart.” The song, which iTunes named “Single of the Week” earlier this year, is featured on the singer-songwriter’s sophomore record, This World Won’t Last Forever, But Tonight We Can Pretend, which was released last month.

I recently had the opportunity to talk with the Florida-based artist about his new record, how a broken CD player influenced more of a pop sound in his music and what he’s looking forward to during his tour with Parachute. 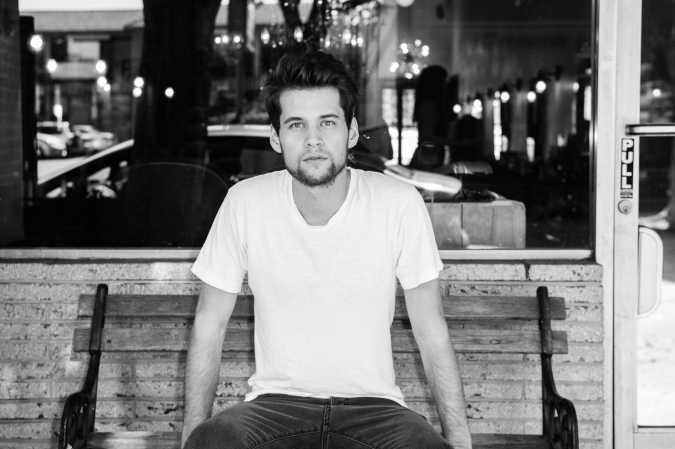 Thank you very much.

Was music something that was always in the plan for you, and did you grow up in a music-friendly environment?

Well, no to the first part of that question and yes to the second. My dad was a drummer. And he played in bands and stuff. He’d been touring since he was my age. I did grow up in a music-friendly environment. Both my parents encouraged my brother and I to start playing instruments at a pretty young age. But it wasn’t something that was always in the plan for me, I guess. I don’t know, I didn’t really feel like I could do it on a professional level or whatever, if you will.

Growing up, when I was real young, as most kids do, I listened to whatever my parents listened to. So I listened to a lot of Beatles and Crosby, Stills, Nash & Young, Simon and Garfunkel, artists like that growing up. As I got into high school, I actually gravitated towards the more pop-punk and emo kind of stuff. Probably the artist who was most influential on my early songwriting, when I started writing when I was 16 years old, I was way into Dashboard Confessional. I guess I just never heard that kind of honesty in songs before and [they were] writing about being heartbroken and falling in love and things like that. I was 16 years old, and that was very relevant to my life at the time. I gravitated towards that and then from there, after high school, I got way into Bob Dylan, which he’s also a very honest songwriter in so many different ways.

With this new record, there’s big Tom Petty influence and more recently, I’ve gotten into The National a lot, and Wilco has always been a favorite. I think I draw some inspiration from them.

So the title of your new record, This World Won’t Last Forever, But Tonight We Can Pretend, comes from your song, “Wishing on Dead Stars.” What made you decide on that particular lyric for the overall title?

It kind of felt right. I compiled this list of like 20 different titles. I don’t know if I’m not good at naming things or I just have a hard time naming albums, naming songs, anything like that. I had this list of 20 possible titles and this one that I landed on wasn’t even on that list. I was just looking through that song, “Wishing on Dead Stars,” one day and that line stuck out to me. I was trying to figure out some way I could make it shorter, like pull part of that out and make it shorter, but nothing really felt right. I ended up with a long title, but it feels right to me.

Your previous work was very much in the vein of a traditional singer-songwriter, kind of the contemporary sound that’s on the radio right now and this album a little bit more of a pop sound to it. What brought out the change in your musical style?

The pop side of it, I guess I can attribute some of it to…I had, I don’t have it anymore, but I had this ’97 Toyota Camry, and the CD player broke in it. The only thing I could listen to in it was the radio. I kind of divided my time between pop radio and NPR. I guess in listening to a lot of the pop stuff, a little bit of that influence worked its way in there. I feel like that might have been it. Also, a lot of it has more of an edge.

When working on songs for this album, was your creative approach (writing lyrics and melodies) any different for this album than previous music you have worked on?

Well, the songs itself was the same. Just writing with my acoustic guitar at home or writing with other people. I did do a good amount of co-writing in the time leading up to this writing. The people that I thought I clicked the most with, I’d go back with them and we’d write more together. One of those was Eric Rosse, who produced the record. We did some co-writing for my first album and we did some more on this record. The other person was Alex Dezen, who is a singer for a band called The Damnwells. We kind of got to be friends and we wrote a lot of stuff together too.

Also, there’s this one song on the record called, “I Am Not Here,” that instead of like most songs, I write on acoustic guitar, but with this one, we wrote it on the piano. Eric Rosse plays the piano, and I wrote it with him. I felt like something…something a little different came out from writing the song with a different instrument.

Leading off the album is your single, “Restless Heart.” It’s a little angsty.

What inspired the creation of this song?

It was the first song that I wrote with Alex. And we were trying to figure out the song. We were sharing stories of past girlfriends, experiences we’ve had with a kind of person who’s like a heartbreaker and moves from one guy to the next. So we wrote this song, it was kind of a compilation of both of our experiences. It’s a little bit angsty, like you said. It’s a little bit of an anti-love song. One of the lines in the chorus is, “You say love is all that you need, but you’re not going to get it from me.”

Aside from “Restless Heart,” is there a song on the album that you hope people take to after listening to it?

With that one, probably two years ago, I was going through a little bit of writer’s block. I just wasn’t happy with what I was writing and I couldn’t finish any songs or anything. With this song, I sat down and I asked myself, “What made you start writing songs in the first place?” And this song came out. It’s kind of a special song to me, so I hope people get through to the very end of the record, listen to that song and like it.

Switching gears, you’ve been on tour quite a lot this year, including a run with Matchbox Twenty – how was that?

It was awesome. It was great. It was the biggest audiences I’ve ever played to before. And they were just great dudes, fun to hang out with and all the crew was great. It was a really cool experience for me, and to see a band like that that’s been doing it for so long that doesn’t just kind of kick back on their greatest hits or whatever, they’re always out there pushing themselves and innovating and still killing it, you know?

Definitely. Do you have a favorite and least favorite part of touring?

My favorite part is being able to play music in front of people every night and do what I love to do every day. My least favorite part, I guess, would be some of the long drives and being away from home for so long can be a little taxing sometimes. I actually just drove – I’m about to start another tour with Parachute – and I just drove from Tampa, where I live, to Denver, Colo. where all the guys that play in my band are living. I made that 28-hour drive in two days, so I’m definitely already burnt from driving part of it.

Now you’re gearing up to head out on the road with Parachute. What are you looking forward to about this tour?

I’m looking forward to playing in front of people who have never seen me play or heard my music before and hopefully make new fans. I’m looking forward to hanging out with the Parachute guys and being on tour with them. I hung out with them one day, probably like 2-3 1/2 years ago. They’re all great dudes and I’m a fan of their music and stuff, so I think it’s going to be a good fit and a good tour.

This article was originally published on Blogcritics.org.