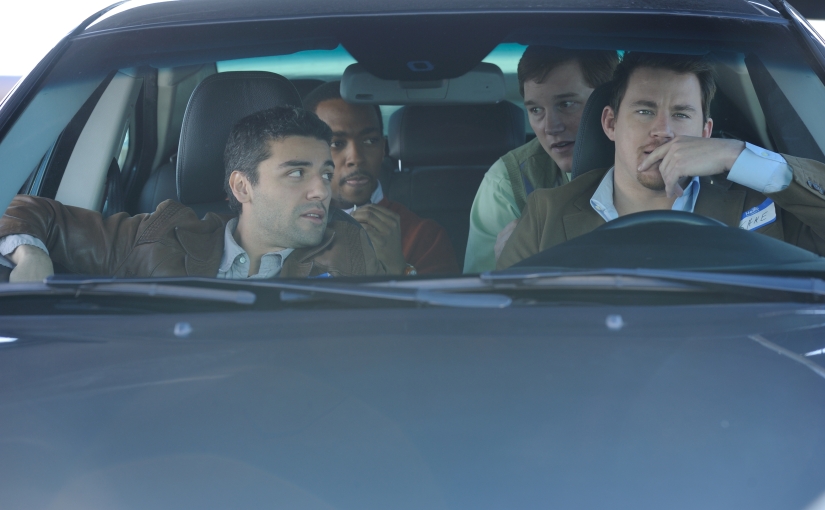 10 Years reunites longtime friends for a night of nostalgia, laughter, and tears at their high school reunion. Written and directed by Jamie Linden, the 101-minute comedy features a talented ensemble cast, including Channing Tatum, Rosario Dawson, and Chris Pratt.
Tatum plays Jake, a mortgage broker, who has a diamond ring waiting in the wings for his girlfriend of three years, Jess (played by his real-life wife, Jenna Dewan-Tatum), but is waiting for the perfect moment to pop the question. Some of his trepidation seems to derive from possible unresolved feelings for his high school flame, Mary, who unexpectedly shows up to the reunion with her husband (Ron Livingston) in tow.

High school sweethearts, Cully (Pratt) and Sam (Ari Graynor), are now married with kids and looking forward to a night with other adults. Cully utilizes his time at the reunion inhaling shots and apologizing to those he bullied in high school.

Rivals, Marty (Justin Long) and A.J. (Max Minghella), spend the evening bragging about aspects of their lives to their former classmates and clamoring for the attention of former high school social queen, Anna (Lynn Collins), whose house they decide to toilet paper before finding out that she’s nothing like the girl they knew back in high school.

Then there’s the band nerd turned rock star, Reeves (Oscar Isaac), who attends the reunion in anticipation of seeing his high school crush, Elise (Kate Mara). Their playful interactions throughout the night lead up to a sweet reveal that genuinely took me by surprise.

One of the things that I really liked about this film is that it was great to see so many big names join together to collaborate on a project. Including the aforementioned names, 10 Years also stars Brian Geraghty, Anthony Mackie, Aubrey Plaza, Scott Porter, Aaron Yoo and Nick Zano.

Even though at times there was a lot going on, due to so many characters; I felt like the transitions between the intertwining sub-plots flowed pretty well.

The soundtrack for 10 Years is also what really brought the film together for me. From Jamiroquai to The Pharcyde to Passion Pit covering the Smashing Pumpkins’ “Tonight, Tonight,” the music really provided a genuine sense of nostalgia. Fun fact: Reeves’ hit, “Never Had,” was both co-written and performed by Oscar Isaac especially for the film and is included on the official soundtrack.

So what didn’t work so much for me? Cully. At first the character comes off as a playful guy that is looking forward to a night of fun with his high school buddies, but it got to the point where he was just exhausting to watch after awhile. I appreciated that the former high school bully would go out of his way to apologize to those he tormented, but after a couple belligerent scenes, it just got to be too much.

Overall, I found the film to be pretty solid. If you’re looking for a touching comedy that features an all-star cast, 10 Years is definitely worth checking out.

10 Years is available on DVD now.