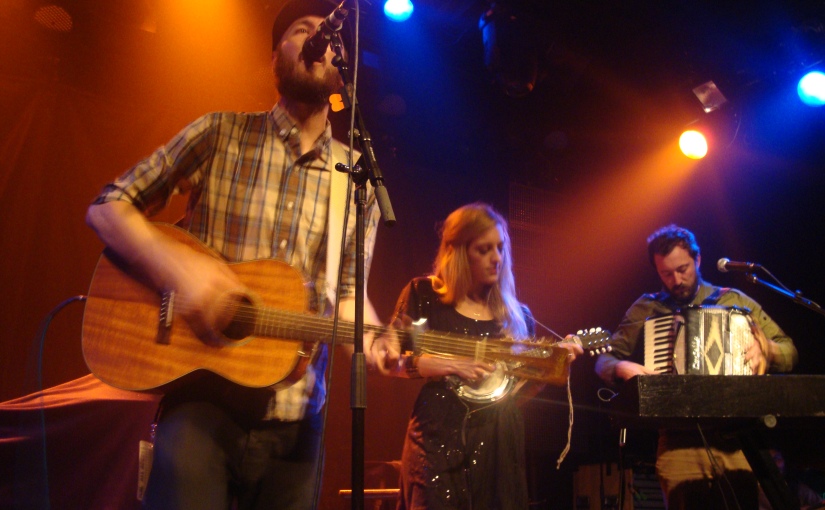 The “brain child” behind Avalanche City talks about creating music & teaching himself how to sing.

New Zealand-based folk-pop singer-songwriter David Baxter accomplished what he considered to be a challenge to himself last year. Under the guise of Avalanche City, he released his debut full-length album, Our New Life Above Ground, in which he recorded, produced, and played every instrument on the album himself. The single, “Love Love Love,” is double platinum in New Zealand after debuting on that country’s singles chart at number one. Last month Avalanche City released the Love Love Love EP in the U.S. and hit the road with fun. for a string of dates on their current U.S. tour.

Before Baxter hit the stage at last week’s sold out show at The Independent in San Francisco, CA, he took the time to sit down with me to talk about what inspired him to make his successful album, teaching himself to sing, and what he looks forward to in his career.

How has touring with fun. been?

Has the audience been pretty receptive to a relatively unknown band?

Yeah, I would even say completely unknown. [laughs] But nice diplomatic choice of words. Really, really good reception from the audience. It’s been so good.

How was playing at SXSW this year?

Crazy. I don’t think SXSW can be anything other than completely crazy.

I read that you started playing instruments when you were really young. What drew you to play music at such a young age?

I don’t really know. [laughs] I’m not sure. I’ve got photos of me in my nappies with a fake electric guitar and sunglasses on. I’ve always been drawn to music, I’m not sure why.

What was your goal when you first started to create music? Was it just to create or did you want to make a career out of it?

To be honest, I used to just get taught songs from my guitar teacher when I was like nine or ten. And I would change the way that I would play a certain chord. Right from the start I was trying to change things and make them my own. I don’t know why. I’m not really sure if at that point in my life I had any kind of goal; I was just trying out new things.

You went from songwriting and working as a record engineer to putting together your own album; what made you decide to segue into putting your own project together?

A lot started with me being friends with lots of vocalists and being insanely jealous of how they could sing and I couldn’t sing. A lot had to do with me wanting to try out new things. If I’m no good at something, I like to try it until I get better at it. In music anyway, not so much in other life.

So working on your own project was more or less a challenge to yourself?

Yeah, it was. At that point, I could kind of play a few instruments. Not like amazingly or anything. I’m by no means a master of all the instruments I played on the album. I would just be really frustrated that I couldn’t sing, cause it felt like something I should be able to do as a musician. And I had a friend who actually taught himself how to sing. So he told me that, and I was like, “Wow, you actually can teach yourself how to sing.” So that was kind of the point that spurred me down this path.

What is the process of teaching yourself how to sing like?

It’s a long process. [laughs] Cause essentially your voice is a muscle. My voice obviously at that point was a really weak muscle, because I never used it for singing at the time. It was a long process, like months and months, like six months, of singing every day.

It was funny because I actually started to identify with the people on American Idol, who thought they were like really, really good, and they’d sing for the judges and they were actually atrocious, because I’d have moments where I’d make up simple melodies for myself to sing, and I’d be like, “Yeah, I’m getting that good. I’m going to record that.” Then I recorded it and listened back and it was horrifying. So I would delete it and go through the computer and make sure they were all gone. And that was point where I was like, “Wow, people actually do think they can sing, but they actually can’t. And that’s me.”

When did you feel like working on your singing voice was starting to turn in your favor?

I was working in a recording studio for years recording vocalists, so I knew what I was hearing and I was good at talking vocalists through singing and everything like that, but I couldn’t do it myself. I had an ear for it, because I did it every day as a job, so I could kind of tell when it was getting better and better, and I’d start to show friends and they’d be encouraging. And then eventually a friend booked me a show that was like two or three months away, so I had time. So, I had something solid to work towards. That was a big part of it as well.

You not only made the decision to do an album, but you also also decided that you were going to handle all the particulars (writing/recording/producing/instrumentation) yourself.

It was just inspiring to know that other people had done it that way. Ever since I heard that, I decided it was something that I really, really wanted to do. And also just from the fact that I would work in the studio and record – I wrote music for TV and stuff like that – I’d always be playing the stuff that I was recording, so I’d be the recorder/producer/engineer on that kind of thing.

I kind of knew that I could do it on a 30-second kind of song scale. I was like, “Surely I can transfer this to an album,” and that was the challenge. It really was a self-challenge kind of thing.

What was the creative process like when putting the project together? Did you usually start with the melody or the lyrics?

What was the time period from recording the music to putting it out?

It was a good few months, like four or five, maybe even six months. It was a long time. The actual span of recording on the instruments for the album was only a week, but at the point that I started, I had only been singing as Avalanche City for six months. The vocals recording process was the longest and hardest thing I’ve done in my life.

Now you have an EP out in the U.S. featuring your single, “Love Love Love”; what was the process of figuring out what other three tracks would round out the EP?

Obviously it’s tricky; how do you just decide on an EP with four songs? How do you make that choice? Some people made some suggestions for the songs, and they were actually good suggestions. I was about to change them all, and I just looked at the songs and I thought, “That’s okay.” We’re saving some of the really good ones for the album, as well. It’s tricky. To be honest, I didn’t lose sleep over it, because it could have been a decision that could have taken me months to decide.

With Avalanche City picking up speed, and I’m assuming you’re going from the EP to releasing a full-length album in the states, how would you like to see your career progress from here?

My goal for this is just to have an awesome ride and meet lots of cool people, and play some cool shows. And this is something I would have really tried to do from the start, and anything else that comes from it is like a bonus.