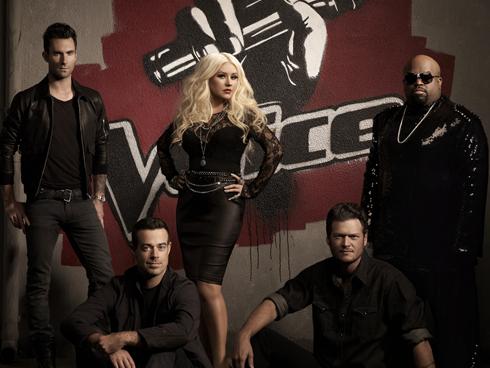 The battle rounds kicked off last night on The Voice!

Last season on The Voice, I couldn’t stand the elimination episodes, because all the singers were so nice and talented, and I didn’t want to see them go. The same thing held true last night, as the coaches began pairing off their teams for battle.

And wouldn’t you know it, Adam Levine decided to rip my heart out and have my two favorite members from his team battle it out, being Chris Cauley and Tony Lucca.

I think The Voice knew that this battle would make a lot of people upset, which is why it was the first of the battles to be shown last night. Like, when you know taking off a band aid is going to hurt, so you do it quickly – that’s what I would compare this battle to. And yeah, the results of this battle stung the most, because it meant a crazy talented person wasn’t going to advance to the live rounds.

Adam tells the guys that they are singing U2’s “Beautiful Day.” Per Chris Cauley, the show had to let the band see footage of the singers before they cleared their song for usage. Crazy!

I thought both guys did a great job with the song. I thought Tony struggled a bit with his first big note, but he nailed the second one. Both singers really gave it their all, and I really appreciated that they weren’t trying to upstage one another. And as a longtime fan of Tony, I have to say that Chris, in my opinion, edged him out vocally. I can understand why Adam picked Tony, but like Yahoo’s Lyndsey Parker said in her recap, “…who would have ever thought Chris Cauley would be the FIRST contestant to get eliminated this season?”

One of my favorite things about The Voice is finding new artists to listen to, and I’ve already done some iTunes shopping for Chris Cauley tunes. I cannot wait to see what’s next for him. (BTW, how classy was his exit last night? Never thought I would see Adam Levine on tear up on TV.)

The night led us to Team Blake, where Blake Shelton announced that RaeLynn and Adley Stump would be going head-to-head on “Free Fallin’.”

First off, fantastic song choice. I figured both singers would struggle with it, because RaeLynn has quite the country music twang and to be honest, I didn’t love Adley’s blind audition, so I wasn’t sure how this was going to work.

During the first run-through of the song with both girls, Adley blew me away! Her voice was so pure and strong. RaeLynn  seemed to struggle a bit, which I wasn’t surprised at, but I wanted her to do well, because I did really enjoy her blind audition.

The girls then met up with their advisors; Adley got to work with Queen Kelly! (I live a Kelly Clarkson appreciation kind of life, just FYI.) RaeLynn got to work with Miranda Lambert (Blake’s wife). I love RaeLynn’s reaction to Miranda, “You’re real!” After some receiving some vocal/performance tips, the battle was on!

As much as I adore RaeLynn, it was not her night. Adley handled that song like a total pro. I think Blake partly picked RaeLynn so he wouldn’t have to see her cry and probably because he totally loves those unique kind of vocal stylings. I totally understood what he meant about Adley not really feeling the lyrics she was singing. She can sing, there’s no doubt about it, but even she admitted that she’s a relatively new singer. I can see the singing for the sake of loving to sing going on, and it’s definitely not  a bad thing, but this show is looking for The Voice. Meaning, the voice should be able to attack a song and make you feel it. I think Blake recognized that RaeLynn has more potential right now to work with. That’s just my theory.

Next up, it was Team Xtina up to bat. The first two contestants to battle would be Chris Mann and Monique Benabou. They would be rockin’ Celine Dion’s “The Power of Love.”

Who knew that the song that Christina picked probably with the purpose of allowing Chris to shine during the battle would lead to Monique being the stand out? But before I get ahead of myself….

During the initial rehearsal, Monique was nervous, because Chris has this huge, operatic voice and she’s never had any formal training. I wasn’t sure what to really expect.

After the two respectively met with their advisors, Chris with Lionel Richie, Monique with Jewel, it was time to battle!

I have to admit that I was kind of baffled by Christina’s decision to go with Chris after Monique absolutely slayed this song. Just thinking about that last big note she delivered gives me chills. It was this performance that had me convinced that Christina had already decided before the battle that she was putting Chris through to the next round, even though his performance, in my opinion, wasn’t up to par. I thought his voice complimented hers well, but watching Monique vocally blossom and just throw it down was amazing.

I will definitely be keeping an ear out for Monique’s tunes, because this gal deserves to do big things!

Team Cee Lo was up next and the first two teammates to battle it out would be Angie Johnson and Cheesa Laureta singing “Total Eclipse of the Heart.” Perfect song for two ladies with big voices.

The ladies met with their advisors, Angie with Ne-Yo and Cheesa with Babyface, and then the battle was on!

Going into the battle, I definitely gave Angie the edge. I think she has the more powerful voice. But when Cheesa nailed that big note that she had nerves about hitting, I figured it was game over. But both of them were fantastic. Although, I think Angie probably had the best overall performance.

I think it probably should have gone Angie’s way, but I’m not surprised that Cee Lo went with Cheesa. She’s proven that she can conquer those big notes.

Team Blake was up again, this time Jordis Unga and Brian Fuente facing off.  The duo was set to perform Alanis Morissette’s “Ironic.”

They went on to meet their advisors, Brian hung out with Queen Kelly and Jordis kicked it with Miranda Lambert, then the battle was on!

What transpired during their battle was unfortunate. What happened to the Jordis we saw during the blind auditions? I thought both singers had pitch issues, but of the two, Brian really pulled off the performance. He had to step it up with this performance, and with Jordis losing her way, I thought this was his for the taking.

In the end, Blake put Jordis through to the live show rounds.

The show closed with another battle from Team Xtina, this time Anthony Evans and Jesse Campbell were set to battle to the tune of Alicia Keys’ “If I Ain’t Got You.”

During initial rehearsals, Jesse seemed to have a slight air of arrogance. I get it dude, all four coaches turned around for you, blah blah blah. Humility goes a long way. Not to the live show rounds, but we’ll get back to travesty in a sec.

The guys met up with their advisors Jesse with Lionel and Anthony with Jewel, and then the final battle of the night was on.

I will hand it to Jesse; he can sing his face off. He has amazing stage presence. However, Anthony should have been put through to the live rounds based on his final note alone. I had chills…I still have chills. From what I’ve seen online, other than the Tony Lucca/Chris Cauley battle, most of the outrage over last night’s battle rounds is over Jesse being put through to the live show after Anthony seriously pulled out all the stops to show why he deserved to stay. Who knows what Christina’s method of madness was in this particular case, but I was disappointed to say the least.

It was indeed a heartbreaking first round of battles on The Voice last night.

What did y’all think about the performances & eliminations? If you could bring one contestant back to compete in the live shows, which one would you choose?

Pretty tl;dr for my first actual show “recap” of season two. I’ll work on it.