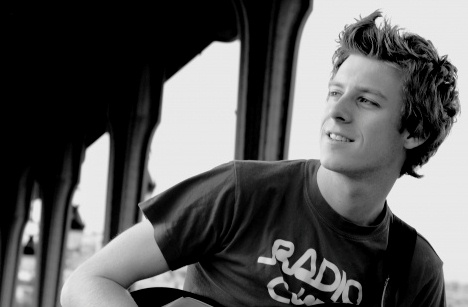 There’s definitely something to be said for independent musicians. They aren’t completely jaded by the music business, they still express their passion for music, and they work as hard as they can to get their music heard. UK singer-songwriter Chris Townsend would be one of these musicians.

Influenced by The Beatles, as well as contemporary artists, like Coldplay, Matt Nathanson, and Tyler Hilton, the singer told me in a recent email about what made him want to pursue music on a professional level.

“The process of writing and recording my own songs is what really made me want to pursue music professionally,” he explained. “The journey that you go through to transform that first small idea for a melody or a chorus or a few particular words into the finished product is what I enjoy most about it. It is challenging at times, but very rewarding in the end when you have a CD of your songs in your hand.”

Townsend tested the musical waters while studying for his degree in International Law. In 2006, he released an EP, What Are You Waiting For. He followed up that release in 2008 with his first full-length debut, Copenhagen, which was produced by Greg Haver (Mel C from Spice Girls, Manic Street Preachers, and OpShop).

After spending 2009 and 2010 playing shows non-stop, Townsend spent part of 2011 writing what would become his latest EP, Electric Pylons. To fund this project, the singer raised the money necessary to record and release his EP through the generosity of his fan base via Pledgemusic.com.

“Having all my wonderful fans pledging and involved in the recording was very rewarding,” he said. “I was posting video updates, pics, and blogs all the time, and I think was great to have all that interaction with the process in order to show people how much work it takes to records and release new music. I feel very grateful and lucky to have such great support from everyone and reach my target amount.”

Townsend returned to the studio in October 2011 to work with Haver on this latest project. He initially met the producer through friends, and after having a positive experience while working on Copenhagen together, Townsend approached him in September 2011 about recording Electric Pylons.

“Working with Greg has always been fun, and he has loads of great ideas, which I would never have thought of. That is where the added value of having a great producer comes in. The instrumentation and production Greg adds in the studio really lifts the songs to another level,” Townsend said of his producer.

Upon my first listen of Electric Pylons, I realized that Townsend is a musician that knows his sound, and has embraced the pop-rock genre whole-heartedly with melodic, catchy, and lyrically sound tunes.

The EP kicks off with the upbeat “Painter’s Brush.” This track would make a great show opener, especially with how the beginning instrumentation of the guitar and piano build up before the first verse creating an excitement for the song.

“Home Tonight” is where the listening audience gets a glimpse of the sensitive side of the singer. The song plays out as an honest love letter to his significant other. Townsend then switches gears on the next track and puts the “rock” in pop-rock on the guitar-driven track “Closer.” Displaying a more rough around the edges vocal performance, there’s a bit of vocal swag to the track.

My personal favorite off of Electric Pylons is “Stone By Stone.”  I love the piano-based arrangement, as well as the  overall lyrical sentiment of making your way back home. I feel a lot of passion from this song, and it’s the one that I returned to listen to over and over again.

Rounding out the EP is the title track, which was one of the songs Townsend wrote for this project.

“It’s about my journey on the Eurostar between Paris and London,” Townsend shared. He continued to state that he felt like that song summed up his life in the last few years.

I really enjoy the simplicity of the arrangement of this song, and I think it’s a great way to close out the EP.

Overall, I think Electric Pylons is a great listen. Townsend’s vocal performance is impressive and versatile, and I think the listening audience will get a well-rounded idea of who he is an artist. The EP definitely shows the potential of a hit recording artist in the making.

For more information on Chris Townsend and Electric Pylons EP, check out his official website.