I legitimately have a fear of bridges. However, I also have a passion for live music. To get to Ace of Spades in Sacramento on October 10 to see Panic! At The Disco, I drove over  not just one bridge, but two bridges. I wouldn’t do that for just any band. I attended my first P!ATD show back in June, and ever since I couldn’t wait for the opportunity to see them live again, even if it meant reminding myself to breathe while driving over water.

Foxy Shazam kicked off the evening at Ace of Spades. This is a band that I feel like whatever I say would be an injustice to their live show. You have to experience them yourself to truly witness what a trip they are. I’m not versed in their music at all, but I definitely was entertained by their set. 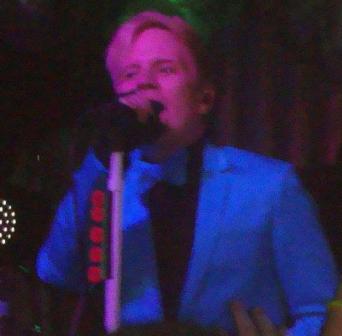 Next up was Patrick Stump, lead singer of Fall Out Boy, sporting a whole new look and a ridiculously awesome new sound. Honestly, I had no idea what to expect from him. The last time I saw Patrick Stump was back  in 2006, when Fall Out Boy was touring with All-American Rejects. You can imagine my surprise when I saw this seemingly shy lead singer take to the stage as a confident solo artist. Let alone while rockin’ an electric blue suit, complete with a bow tie and black fingerless gloves.

I have always thought when lead singers break out and go solo that they have to make sure that they can turn heads and hold people’s attention. Well Patrick Stump, I’m paying attention.

I don’t think I’ve ever been mesmerized so quickly by an artist before. Everything from Patrick’s music, to his band, to his stage presence was absolutely fantastic.

Off the bat with “Spotlight (New Regrets)” to “Run Dry (X Heart X Fingers)” and “Allie”;  I don’t think I’ve had more fun boppin-a-long to songs that I had no clue what the lyrics were. But the arrangements and beats were incredible.  And Patrick’s voice is definitely channeling Michael Jackson, Prince and a dash of Bowie, but it really works for him. I really cannot fully express enough how much I enjoyed his set. It was more than I could have ever expected, and truly was one of the standout moments of the evening.

And on to the main event, Panic! At The Disco! A couple of days before the show, it had been announced that lead singer Brendon Urie was really sick, but he kicked off the band’s set with guns blazing!

Even though the set list was very similar to the show I attended back in June, this show was an entirely different experience for me. In June, I maybe knew one or two P!ATD songs, at best. After being completely captivated by their live show, I went out and bought Vices & Virtues immediately, as well as the band’s first two records. For the most part, I’ve been playing nothing, but P!ATD since then in my car.

There’s a world of difference between observing a band and their fans and experiencing a band as one of their fans. Being able to sing back lyrics and feed off the energy in the room made for one of the best live shows I’ve ever experienced.

I thought Panic! sounded fantastic. I continue to be impressed by Brendon’s vocal prowess and how he just commands the stage like a true frontman. The band seems to love and appreciate their fans just as much or even possibly more than their fans love them.

I really got a kick out of bassist, Dallon Weekes, who went from hyping up the crowd to flying out into the sea of people before him during the band’s cover of The Darkness’ “I Believe in a Thing Called Love.” Check out the video I took of the performance below, complete with Dallon crowd-surfing.

What I really enjoyed about P!ATD’s set was that it really had a flow to it. There was a great balance between songs from their current record and A Fever You Can’t Sweat Out. Slowing down their set with “Always,” leading into “Nine in the Afternoon” and “That Green Gentlemen” from Pretty. Odd. allowed the crowd just enough time to re-energize when the music picked back up.The band put together a set list that makes sense and really kept their audience enthralled throughout the course of the show.

So, was it worth the trip that took me over two terrifying (IMO) bridges to see P!ATD rock it out? Most definitely! I know I arrived late to the party with this band, but I’m happy I finally made it. (Super cheesy, I know!)

All in all, what a fantastic night of music!

3 thoughts on “RECAP: Panic! At The Disco LIVE at Ace of Spades”